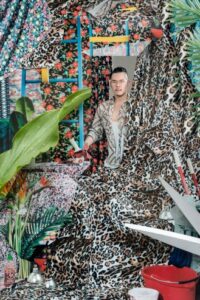 Leonard Suryajaya is the 2016 – 2017 Robert Giard Fellow for his multimedia project Other Mother.

Suryajaya’s work explores intricate and complicated layers of selfhood in the context of cultural background, intimacy, sexual preference, and personal displacement. Prompted by his upbringing as a second-generation Chinese Indonesian raised by a Muslim woman, Suryajaya’s mixed media project examines expressions of allegiance in a globalized world.

“Earlier this year, queer people in my home country of Indonesia saw increasing public hostility and parliamentary attacks on their rights. Condemnation and oppression of LGBTQ identities and expressions are out in full force. In light of these challenges, the Robert Giard Foundation Fellowship couldn’t come in a better time for me and for my work. I am honored, energized, and motivated by being named a Fellow for the 2016-2017 cycle. The support from the Foundation helps guide and support my practice and encourages me to work hard and to overcome my disappointments and fears. If I can’t be queer in my home country, then my work abroad will be an even more defiant testament to alternative ways of being.”