At the 8th Annual Robert Giard Foundation Fellowship Benefit on Tuesday, June 19, 2018, the foundation’s board announced this year’s fellowship winner in photography: Roberto Tondopó (right). His project, “Holy Glorious San Sebastian”, depicts the Chuntás, men who dress as women and dance during the Fiesta Grande of Chiapas, Mexico.

The $7,500 Robert Giard Fellowship is the one of the largest such awards given anywhere to a visual artist dealing with subject matter on sexuality and gender identity.

Mr. Tondopo said “This award allows me to bring to the world stories of the Chiapas LGBTQ community from outside of a culturally hegemonic perspective. The Chuntás are so unusual and powerful because they represent and revitalize the life, religion, and celebrations of Chiapas, while at the same time confronting the patriarchal structures in their natural immersion in the religious culture in which they are. Despite the machismo

that exists in Chiapas, the local population is not scandalized by the Chuntás performance, but instead celebrate it. This is the paradox of a city that both hides and is fascinated by the latent homosexuality of its religious rites and celebrations.” 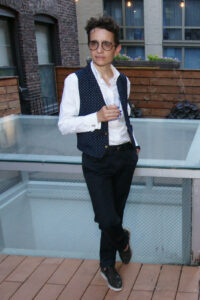 The fellowship benefit took place at the Penumbra Foundation, where guests were delighted to meet this year’s Guest of Honor, National Book Award-winning writer and activist Masha Gessen (left). Gessen is a staff writer at the New Yorker, the author of nine books, including The Future Is History: How Totalitarianism Reclaimed Russia, which won the National Book Award in 2017. She also wrote The Man Without a Face: The Unlikely Rise of Vladimir Putin.  She is a visiting professor at Amherst College, and the recipient of a Guggenheim Fellowship, an Andrew Carnegie Fellowship, a Nieman Fellowship, and the Overseas Press Club Award for Best Commentary.